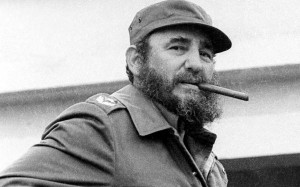 Cuban President Fidel Castro stands at Havana’s Jose Marti airport after sending doctors and medical personnel to Armenia to treat earthquake victims in this May 10, 1978 file photo. Castro, who has not been seen in public for 16 months, suggested on December 17, 2007, that he might give up his formal leadership posts, the first time he has spoken of his possible retirement since he fell ill. REUTERS/Prensa Latina/Files (CUBA)